It’s been an exciting trio of rounds in the Spring iDrive Series, with strong results and fast drivers promising a fantastic iDrive Finale event on the backwards track July 7th. Let’s take a look at some of the highlights from 2021’s three penultimate spring rounds.

Round #4 featured a couple of first-time winners in the Medium class. In Medium A, Ignite and SuperComp driver (and first-time iDrive competitor) Dylan Ellsworth found himself in second place at the end of Race #1 and it only got better from there, with a win in Race #2 of the night. Kartplex regular Max Swarringin took home his first-ever win in a tight finish with Jeremy Franko (second) in Medium B Race #1.

Light driver Nathan Levenhagen earned his first podium finish, with a third place in Race #1. Over in the Heavy class, the evening was dominated by Mark Schwigen (first), Dennis Wilburn (second) and Craig Pyatt (third), who found themselves in identical spots on both Round #4 podiums. 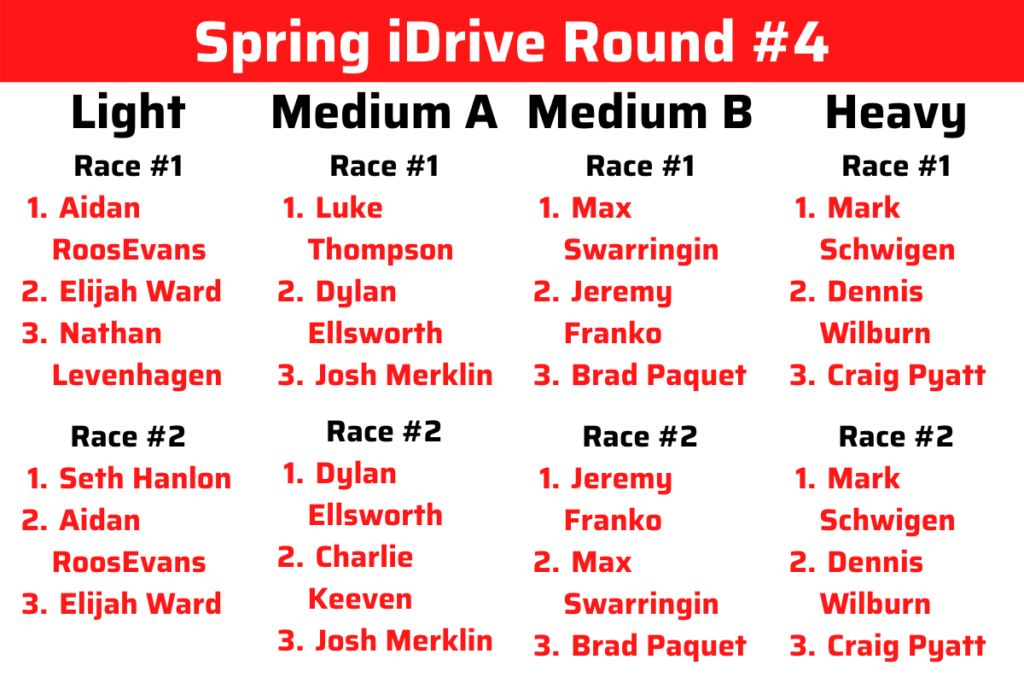 Two weeks later, it was Round #5’s turn to continue a season-long trend of huge driver counts with a record-setting 53 entries. This increase in competitors meant that for the first time ever, all three weight classes were split into two run groups for the evening.

Those split fields gave competitors even more chances at making the top three, and plenty of racers became first-time podium finishers that evening. In Light A and Light B it was Brennan Barnes (second, Light A Race #2) and Paul Oberle (third, Light B Race #1) working their way to the front of the field. Over in Medium A, Charlie Keeven (in just his second iDrive) finished second in Race #1 and won Race #2. But there was no one happier than Heavy B’s Keith Meyer. Meyer, an iDrive regular in his third season at the Kartplex, took home his first pair of top threes with third places in Race #1 and Race #2.

Light class saw the return of the fastest man at the Gateway Kartplex – Jake Spangler. The Kartplex’s rental kart recordholder has only been on track a handful of times in 2021 but proved he still has speed with a third place in Light A Race #1 and a win in Race #2.

As one of only two nights each iDrive season with a special course layout, Round #6’s Extended Turn 3 challenges the entire field to rethink the way they race.

Several Ignite and SuperComp racers turned up for the league night, and their experience on Extended Turn 3 was on definitely on display. 2020 SuperComp Briggs Junior champion Carter Pryor easily sailed to twin Light B victories in his first iDrive start, with 2020 SuperComp TaG Senior champion Rockwell Secrest also on both Light B podiums (third, Race #1; second, Race #2). Ignite was represented by Heavy drivers Randy Murdick (second, Race #1) and Darryl Cooney (third, Race #1). 2020 iDrive Heavy champion Rick Neal was on hand as well, with a solid third place finish in Race #2.

In Medium B, it was all about the iDrive regulars, though – Jeremy Franko (first), Dan Davis (second) and Brad Paquet (third) formed a matched set in both races, keeping the rest of the field off the podium all night long. 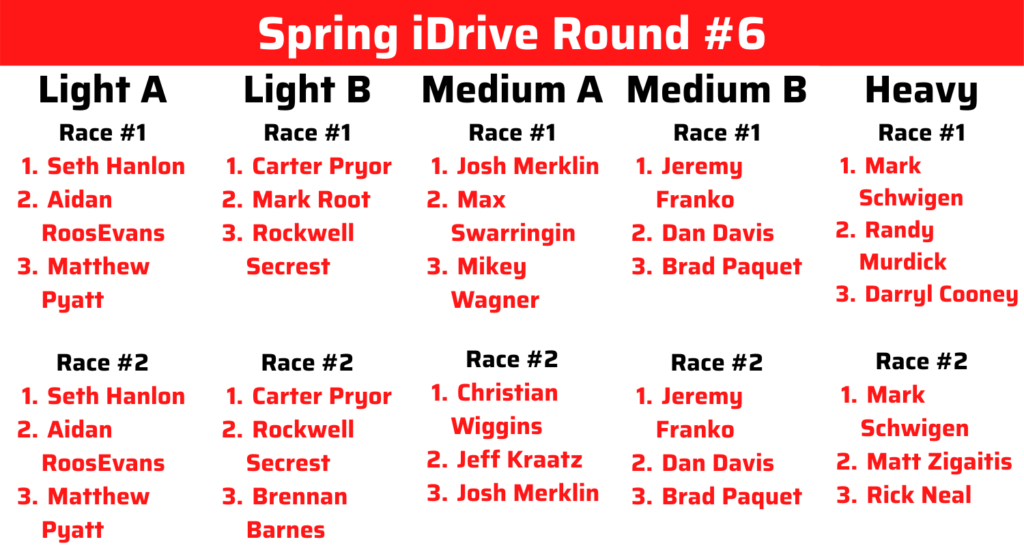 Racing toward the finish

As the weeks ticked by and points added up, 2021 Spring iDrive competitors have jockeyed for more than just position on track. With the Spring iDrive Finale upon us, here are the points battles worth keeping an eye on:

First place – Seth Hanlon and Aidan RoosEvans: These drivers are just two points apart at the top of the leaderboard, and have nearly identical potential drops. Expect both to fight hard for every single point – they’ll need it if they want to win the Spring season.

Fourth place – Mark Root and Matthew Pyatt: Root sits just nine points ahead of Pyatt, and with similar potential drops, it’ll be every bit as close for these drivers just outside the podium as it will be for the top step.

Seventh Place – Brennan Barnes and Paul Oberle: A mere 7 points apart, these drivers have been quietly inside the top 10 for weeks – with a few podium finishes in the past couple of rounds, it’ll be interesting to see this mid-pack battle play out on the last night of the Spring.

Second Place – Jeremy Franko, Dan Davis and Christian Wiggins: Three drivers are all in the mix for he second step on the podium. Franko and Davis are just four points apart and while Wiggins is about 20 points shy of the pair, he’s got more room to improve on potential drops than they do. All three are solid drivers and it’s anyone’s guess who will clinch podium spots.

Eighth Place – Clint Sullivan and Lawrence Dunlap: These are the only top 10 drivers in the iDrive field with a tie headed into the Spring Finale. With Sullivan not attending the final night, it’s up to Dunlap to improve on his lowest scores. He’s only got to score 54 points in a single race to edge past Sullivan – it’s not a tough task but you never know what could happen.

Second Place – Craig Pyatt and Rick Neal: Pyatt is 13 points ahead, but expect Neal to gain a lot of ground. His lowest score right now is a full 16 points below Pyatt’s, so he has a good chance to make up that difference fast. Both have had strong finishes this season, but the edge may be with last year’s Heavy champion – Neal.

Seventh Place – Dennis Wilburn, Buddy Dailey and Keith Meyer: All three drivers have missed multiple races, four each for Dailey and Meyer, a full six for Wilburn. But Wilburn is currently the top of the trio, 13 points above Dailey and 18 over Meyer. Drops aren’t a factor for these drivers – it’s all up to whatever points they can capture in the finale. It could be anyone – new driver Dailey, solid competitor Wilburn or iDrive mainstay Meyer.

Drivers will roll out on track at 7 p.m. July 7 for the 2021 Spring iDrive Finale on the special backwards layout. Keep an eye for final season points later in the evening, and don’t forget that the Fall iDrive is just around the corner with Round #1 on July 28.

Recap and graphics by Rose vonHatten