When all was said and done at the end of the biggest iDrive season to date, it was all about the numbers. With an average of 45 drivers a night, competition was fierce as racers angled for spring championships and a place in the iDrive Shootout. For the final time of the spring season, here’s the finale and overall standings recap.

Keeping with tradition, the final race of the spring was on the backwards layout. This special setup always brings a lot of drivers out of the woodwork to have some fun and this was no exception – big fields meant split races for all three weight classes.

Leading the evening’s program were the Heavy drivers, since a backwards track also means a backwards run order. For Heavy A’s first race of the night, it was 2020 Heavy champion Rick Neal with the win, followed by his race day mechanic Matt Zigaitis (second) and Greg Abrams (third). Abrams matched his finish in Race #2 but Zigaitis wasn’t content to stay second, instead winning Race #2 ahead of Dennis Wilburn.

Heavy B was clearly all about Mark Schwigen and Craig Pyatt, who finished 1-2 respectively in both races, with podiums rounded out by third place finishers Andrew Reese (Race #1) and former Kartplex race director Danny O’Dell (Race #2).

In Medium A, Max Swarringin, Micah Floretta and Josh Merklin kept the rest of the field behind them the entire night. In Race #1 it was Swarringin at the point, followed by Floretta (second) and Merklin (third). But you can’t keep 2020’s Medium champ back for long – Floretta won Race #2, this time with Merkin in second and Swarringin falling back to the last step on the podium.

Medium B saw the return of a storied former Kartplex employee and 2017’s iDrive Light champion – Bobby Krug. Krug definitely still knows his way around a Sodi GT-5, winning Race #1 and finishing third in Race #2. But young driver Charlie Keeven was on the move, taking a second place finish in Race #1 and turning it into a victory in Race #2. iDrive regulars Christian Wiggins (third, Race #1) and Jeremy Franko (second, Race #2) rounded out the Medium B podiums.

Finally, it was the Light class’ turn to show their competitive chops. Nathan Levenhagen, with only a handful of iDrive starts, had the best night in Light A with a Race #1 win and a second in Race #2. Elijah Ward was close, though, also making both race podiums (second, Race #1; third, Race #2). Seth Hanlon topped the Race #2 pack as he worked hard for every possible point in his quest for a coveted spring championship, while Brennan Barnes rounded out the podiums (third, Race #1).

There were plenty of familiar Kartplex faces to be found in the Light B top three. 2019 iDrive Light champ Aidan RoosEvans took the Race #1 checkered flag and wound up second in Race #2 behind Ignite and SuperComp regular Rockwell Secrest, who flipped the tables on RoosEvans after a second place finish in the first race. Ignite racer Brenden Lauer, a former iDrive talent, returned to the iDrive podium with his third place in Race #1, while Floretta captured his third top three of the night when he rounded out the Race #2 podium.

A lot of drivers had strong performances throughout the season, leading to very close battles for trophies after the final checkered flag flew. 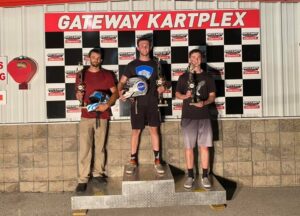 With six wins and four other podium finishes, Aidan RoosEvans managed to edge out Seth Hanlon by four points (1075-1071) to claim yet another iDrive season championship. Hanlon put up a tough fight all spring long, as did third place driver Elijah Ward (999 points), but ultimately they weren’t able to best the 2019 Light champion in enough big fields to close the gap. They did, however, show that the often dominant RoosEvans wasn’t completely untouchable at the top. If we see all three drivers back in the fall, this class will definitely be one to watch. 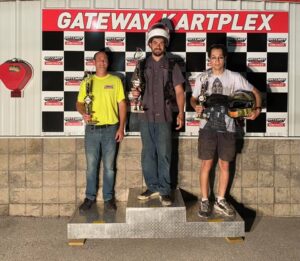 Things weren’t quite as narrow in Medium class, as Josh Merklin took home his first iDrive season championship by the slim but comfortable margin of 21 points over iDrive regular Jeremy Franko, 1012-991. This is Merklin’s second overall iDrive top three, after he finished second to Micah Floretta last year. Rounding out the Medium podium was Christian Wiggins with 974 points, who kept the always solid Dan Davis off the last step by only a single point. With noticeable improvements by a number of Medium drivers this spring, particularly Franko, it’ll be interesting to see which drivers might be in serious contention for a fall championship. 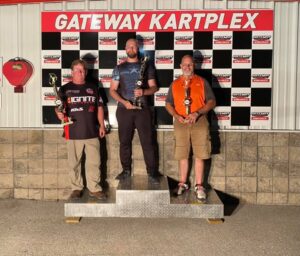 Spring iDrive’s tightest battle was decided 1,006 to 1,003 – one point for every year the champ’s been in the hunt. That was the razor-thin margin of victory for Matt Zigaitis, who finally won his first iDrive championship in the spring Heavy class over Mark Schwigen (second). It was a jubilant moment for Zigaitis, who has gotten tantalizingly close to overall wins in the past with multiple top five season finishes and a heartbreaking 4-point loss to Rick Nealin last season’s iDrive Shootout. Neal was within a hair of being on the spring podium, finishing one point behind third place driver Craig Pyatt (965 points). Expect these drivers to continue being dominant forces in every Heavy race they’re at this fall.

Finally, here’s who punched their ticket to race for a chance at an iDrive Scholarship K3 kart, courtesy of Margay Racing. 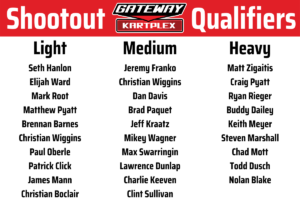 Kartplex Firing on All Cylinders For Start of Race Season

Spring iDrive Round #2 Has Historic Turnout