2020 was a year of challenges, forcing tracks, drivers and crews to adapt to a difficult and ever-changing pandemic environment. But there were plenty of competitors and teams that found a way to thrive amidst it all, and they finally got the chance to celebrate their 2020 achievements during the Ignite Mega Weekend May 22-23.

The awards ceremony – usually held in the wintry off-season – moved outdoors for the first time, with friends, families and fans congregating at the Gateway Kartplex just steps away from the start/finish line of the very track they’d been battling on last season. Kartplex General Manager Keith Scharf, the evening’s emcee, also mixed things up by trading in his usual tuxedo for a kart-print Hawaiian shirt. The ceremony had a matching fun and casual vein, with a barbeque beforehand courtesy of the Kartplex Racing Family Group (spearheaded by 2019 Sportsman of the Year Jess Mayer).

Despite the tough year, Ignite and SuperComp fielded over a thousand entries – more than ever before – on 10 different track configurations. The iDrive Series, Kartplex’s rental racing league, also grew, averaging seven more drivers per night than in 2019. 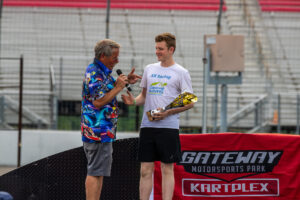 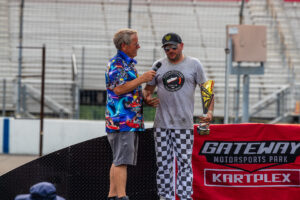 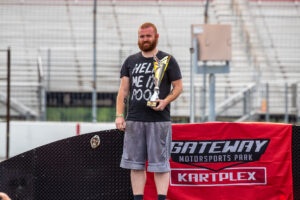 Starting off the awards for the evening were the iDrive Scholarship recipients. These three drivers raced their way through strong fields of competitors in iDrive, the Kartplex’s rental racing league, with their eyes on an exciting prize – a new Ignite K3 kart for the 2021 season, courtesy of Margay Racing. In Light class, Adam Key of Marthasville, Mo., went from being 2019’s Light runner-up to the 2020 champion following a great performance in the iDrive Shootout. Kirkwood, Mo.’s own Micah Floretta handily kept the rest of Medium class behind him in both the regular season and the Shootout, where a clean sweep of wins made him an iDrive champion. Finally, Rick Neal of Imperial, Mo. turned uneven finishes and a modest fifth place in the regular season into two Shootout wins to secure his place in the Ignite Heavy field for 2021.

Next up, it was the track’s youngest competitors – Ignite’s Kid Kart Honda and SuperComp’s Kid Kart. Ethan Schmidt of Weldon Spring, Mo. was undefeated in Ignite’s Kid Kart Honda last season, clinching the 2020 championship. St. Louis native Andrew Hrbacek found success in both series, with seven wins propelling him to a Kid Kart championship in SuperComp, as well as a string of podium finishes landing him second place in Ignite. Both young champions, now nine years old, have moved up into the Rookie class for the 2021 season. 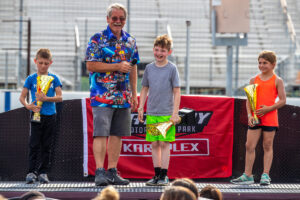 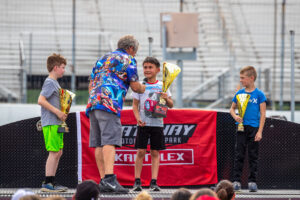 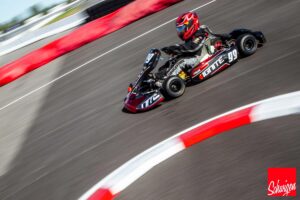 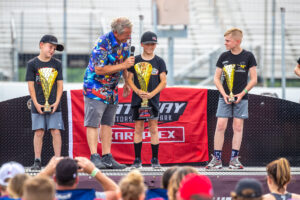 Multi-class champion Race Beckman of Fenton, Mo. took home first in Ignite Rookie as well as SuperComp’s Briggs Rookie and TaG 60 classes, and added to his haul a second place in Ignite Challenge Rookie. At just nine years old, he was the only driver to podium in four classes. 11-year old Lane Mayer, hailing from Arnold, Mo., was the Rookie champion in Ignite Challenge. Mayer finished the season with seven wins in 10 events, including at least one at every track he visited. Mayer has joined the 2021 Junior ranks, while Beckman remains in the Rookie class. 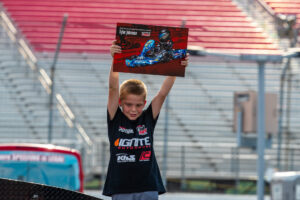 Winning the first annual award of the night was another Rookie driver, Tyler Johnson. The 10-year-old was honored as the 2020 Racing Forward Young Driver for his improved track performance and kart control. Johnson ended the 2020 season with 11 podium finishes, a marked jump from his single podium in 2019. He also put his hometown of Columbia, Ill. on the map for North American drivers with his 16th place finish in the Briggs Weekly Racing Series youth standings. 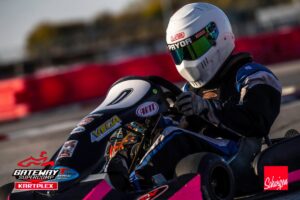 In Junior, only 14-year-old Carter Pryor could stand in the way of St. Louisan Reid Sweeney taking home a championship in three series for the second year in a row. Pryor, a Caseyville, Ill. native, swept the first six SuperComp Briggs Junior races to clinch the series victory over 15-year-old Sweeney. But it was hard to find another driver as fast as Sweeney, who was at the top of the field in Ignite Junior and Ignite Challenge Junior. Pryor, who moved up to Senior class for the 2021 season, is already making waves in his new class with two podium finishes and a top five in four SuperComp races. Meanwhile, Sweeney is currently undefeated in the Junior class in both the Ignite and Ignite Challenge series. 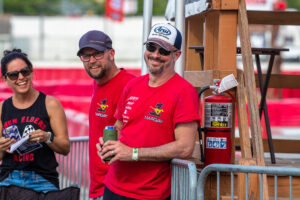 Dave Sweeney (center) smiles as he figures out he is the 2020 Mechanic of the Year, while Lisa and Justin Elders (left) look on. 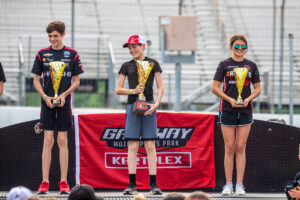 Helping Sweeney to years of strong finishes and numerous championships is his father, 2020 Mechanic of the Year Dave Sweeney. While presenting the award, emcee Keith Scharf noted that the elder Sweeney’s skill is such that he could have been honored for his mechanical achievements in any number of years. But Dave Sweeney gave all the credit for success to his son, telling the crowd that it’s easy to look good as a mechanic when you have as talented a driver as Reid in the seat. 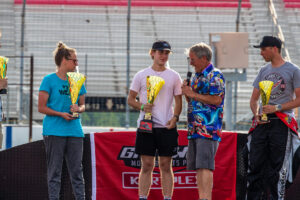 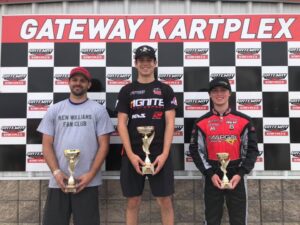 Year after year, Senior class shows up with big fields full of talented, competitive drivers and 2020 was no exception. It was Troy, Ill.’s own Trevor Eggemeyer with the season championship in SuperComp Senior. Eggemeyer got a full podium of 2020 finishes, winding up second overall in Ignite and third in Ignite Challenge. Alexander Searle, who traveled all the way from Plantation, Fla. to compete in the regional Ignite Challenge series, made all those miles worth it when he took home first place after a close points battle with the Kartplex’s own Bobby Krug. No one could stop Krug in the Ignite Series, who raced his way to five wins and four second place finishes, securing the Mt. Olive, Ill. driver’s first Ignite championship. Expect to see Eggemeyer and Searle chasing series victories again in 2021, with Krug looking to pick up a few races throughout the year but not in contention for any championships. 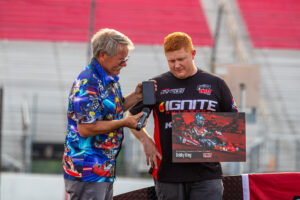 In addition to winning a title, Krug was able to check another thing off his bucket list when he was presented with the 2020 Racing Forward Adult Driver award. Transitioning over the years from iRacing to iDrive to Ignite, Krug notably improved over previous seasons (two podiums in 2018, four in 2019), rocketing to the top of the 2020 Ignite Senior field with nine podiums. He also wound up an impressive fourth overall in the Briggs Weekly Racing Series’ North American adult standings. 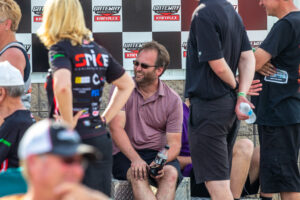 Veteran driver Ken Williams of High Ridge, Mo. was the big winner in Ignite Challenge’s Masters class. This is his third Challenge Masters title in a row and his fourth Challenge title in as many years, having won the Senior class in 2017. 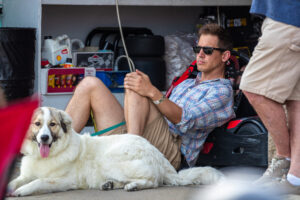 Luke Webster, 2020 Ignite Master champion and Rookie of the Year, reclines against a kart with his dog, Bo.

Typically, terms like “veteran” and “years of experience” describe Ignite Master champions (see Williams above). But 2020 was a year of firsts for St. Louisan Luke Webster – first season racing in the Ignite and SuperComp Series, first time wrenching on a kart and, most important of all, first Ignite Master championship. Add that victory to a third overall in Ignite Senior and fourth in SuperComp’s Briggs Senior, and the result was unquestionably the Kartplex’s 2020 Rookie of the Year. 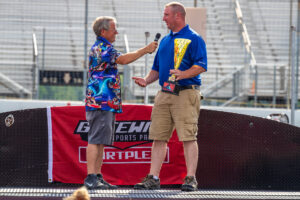 Rounding out the competitive awards were three talented adult drivers – Craig Loddeke, Rockwell Secrest and Joe Mareschal. Loddeke was a dual champion in 2020, with both Ignite and Ignite Challenge Heavy titles in the Breese, Ill. driver’s grasp after five Ignite and three Challenge wins. Loddeke is always a strong presence in Heavy class, but the Ignite Challenge championship didn’t come without a fight – Blake Galloway was a close 23 points behind him at the end of the 2020 regional series. Secrest was alone on the year-end podium in SuperComp’s small TaG Senior class, where the St. Charles, Mo. native won eight races – including two victories against Scharf, the evening’s emcee. Mareschal, in a similarly small field, was the SuperComp winner in Open/Shifter class with his #45 kart out of Ballwin, Mo. 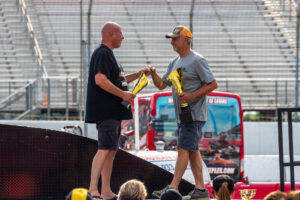 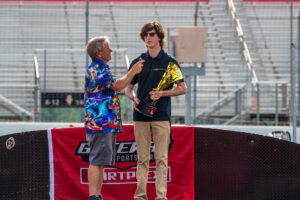 Closing out the evening was the final annual award – Sportsman of the Year. At last year’s banquet Scharf called it the “Good Gal” award and the same was true again for 2020, with Lisa Elders honored for her positive energy at the track, where she helps foster a friendly, welcoming environment and cheers on every driver, regardless of class or speed. 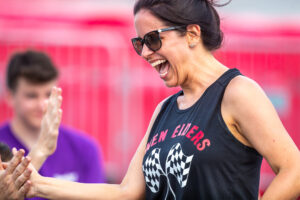 Lisa Elders displays her famous friendly attitude as she high-fives the crowd on her way up to accept the 2020 Sportsman of the Year award.

Even as 2020’s champions collected trophies and reflected on their past successes, they – and every other driver – remain focused on the races yet to come and the 2021 Gateway Kartplex and Ignite Challenge seasons currently in progress. For those dates, check out the Gateway Kartplex 2021 Ignite and SuperComp season schedule, 2021 iDrive Series schedule and Ignite Challenge website.

Thanks to all the Kartplex and Ignite Challenge competitors for a great 2020 season and an already exciting, record-breaking 2021 season in progress!