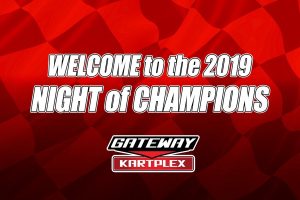 Gateway Kartplex celebrated a year of milestones at its annual banquet February 1st.

Highlights of the 2019 season included the 50th Ignite Series race and a record 184 entries at the Ignite Challenge weekend in October that featured a historic 33 karts in one Senior final. It was the largest season to date, with landmark fields in multiple classes helping push the Kartplex to over 1,000 total entries in 23 races.

It wasn’t just the fields expanding, though – the addition of a new paved triangle allowed for several new track variants and extended the Kartplex’s back straight from 700 feet to a maximum of 1150 feet. Even the most experienced Kartplex competitors were kept on their toes in 2019 with eight different course configurations to challenge them.

Racers small, large and in-between received awards for their accomplishments on those varied Gateway Kartplex courses as well as in the travelling Ignite Challenge series. 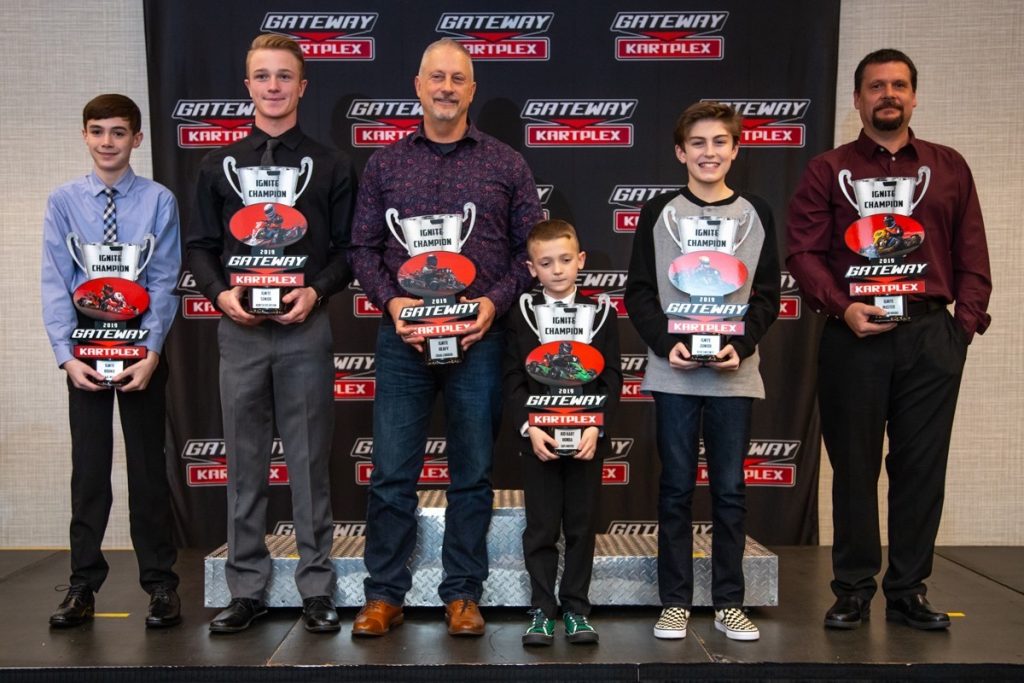 One remarkable pair are 8-year-old double champions Gus Mayer and Race Beckman. Mayer doubled his pleasure with championships in Ignite’s Kid Kart Honda and SuperComp’s Kid Kart classes, while Beckman landed at the top of the series podium in Briggs Rookie (in 2019’s tightest championship points battle) and TaG 60 in addition to finishing fourth in Ignite Rookie. 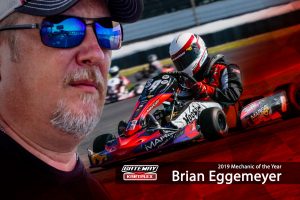 2019 Mechanic of the Year Brian Eggemeyer.

Junior driver Reid Sweeney, 13, was a triple threat as the evening’s only three class, three series 2019 champ – he raced his way to first place in Ignite Junior, SuperComp’s KA100 Junior and Ignite Challenge’s Junior class. His biggest competition this year was 16-year-old champion Trevor Eggemeyer, who finished second to Sweeney in Ignite Junior and KA100 but dominated Briggs Junior with nine wins in 10 races. Brian Eggemeyer, Trevor’s father, was the recipient of the 2019 Mechanic of the Year award for his efforts in tuning and maintenance (finishing the season with a 100% race completion rate), as well as for building one of his son’s karts.

In his first full season at the Kartplex, Isaac Wells won the Kartplex’s hard-fought Ignite Rookie championship by a margin of just 42 points, the second-closest championship of the year. His consistent improvement and dedication to practice time led to five Ignite Rookie wins, including four in a row at the end of the season, and earned him the 2019 Racing Forward Young Driver award. 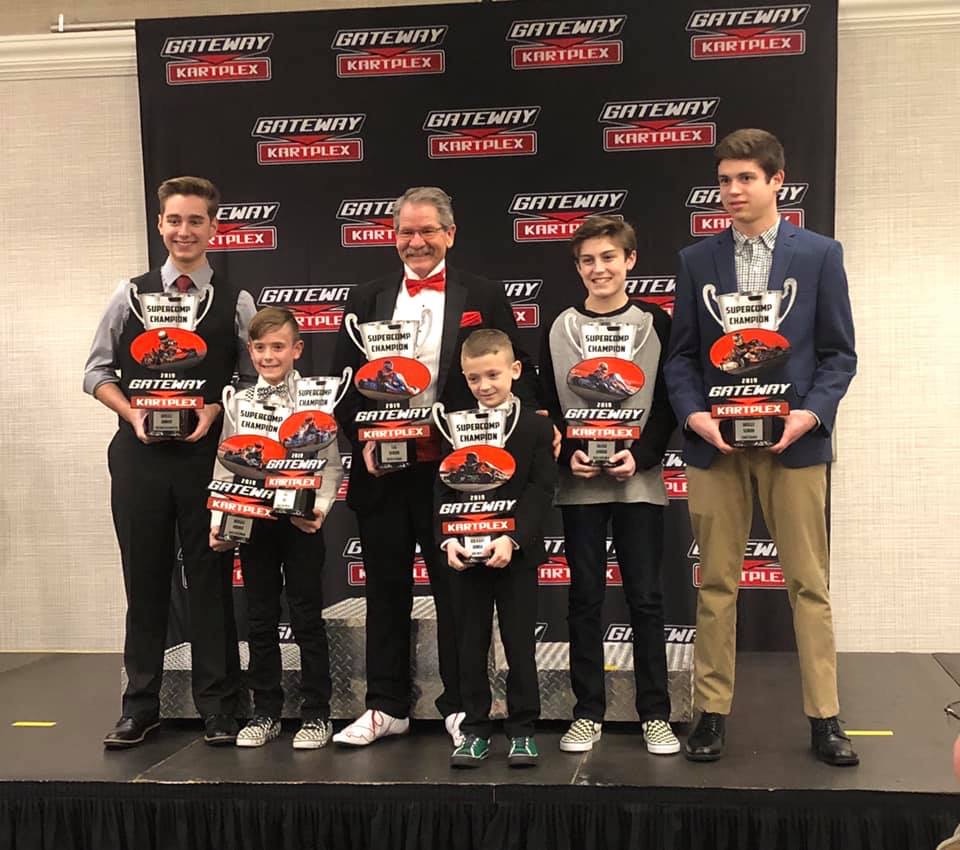 Also in the hotly contested Ignite Rookie and Briggs Rookie classes was brand new driver Owen Elders, who finished third in each class and at just 11 years old was the first ever recipient of the Kartplex’s Rookie of the Year award. This new award will be presented annually to a single driver of any age for an exceptional performance in their first season at the Kartplex. With seven Ignite Rookie and six Briggs Rookie podium finishes, including a pair of Ignite wins and three SuperComp wins, Elders was certainly deserving of this honor. 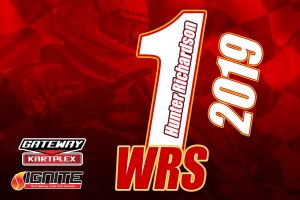 Senior driver Hunter Richardson had one of the best years of any competitor at the banquet – and in North America – finishing with a championship in the Kartplex’s largest class, Ignite Senior, as well as second place finishes in Briggs Senior and Ignite Challenge’s Senior class. His decisive seven Ignite Senior victories, in consistently large fields, propelled him to the #1 ranking out of 1,980 American and Canadian competitors on the Briggs and Stratton Weekly Racing Series Senior/Master drivers list. These dominant finishes and his jump from fourth overall in the 2018 Ignite Senior class to first this year helped the 18 year old win the 2019 Racing Forward Adult Driver award.

The 2019 Briggs Senior and Ignite Challenge Ignite Senior champion was 18-year-old Evan Stamer. As one of the founding Ignite series racers, Stamer came to the Kartplex in 2014 with no karting experience. Now with six seasons under his belt he is a force to be reckoned with, scoring his 8th Kartplex championship and his second in a row in Briggs Senior. Also repeating as a champion was Gateway Kartplex General Manager Keith Scharf, who won the SuperComp TaG Senior championship for the second straight year. 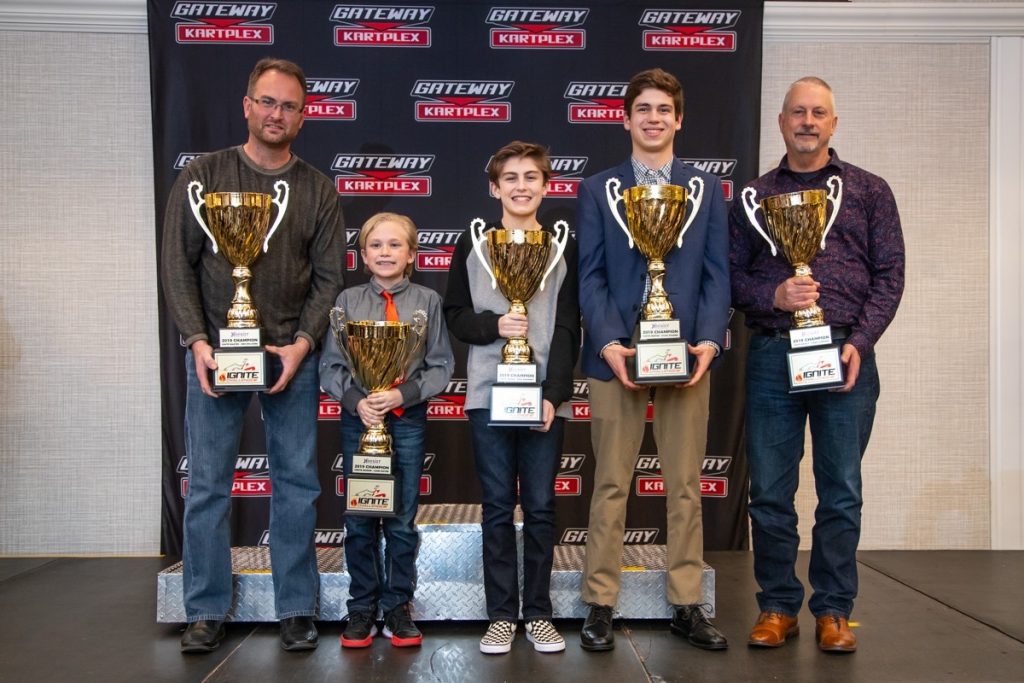 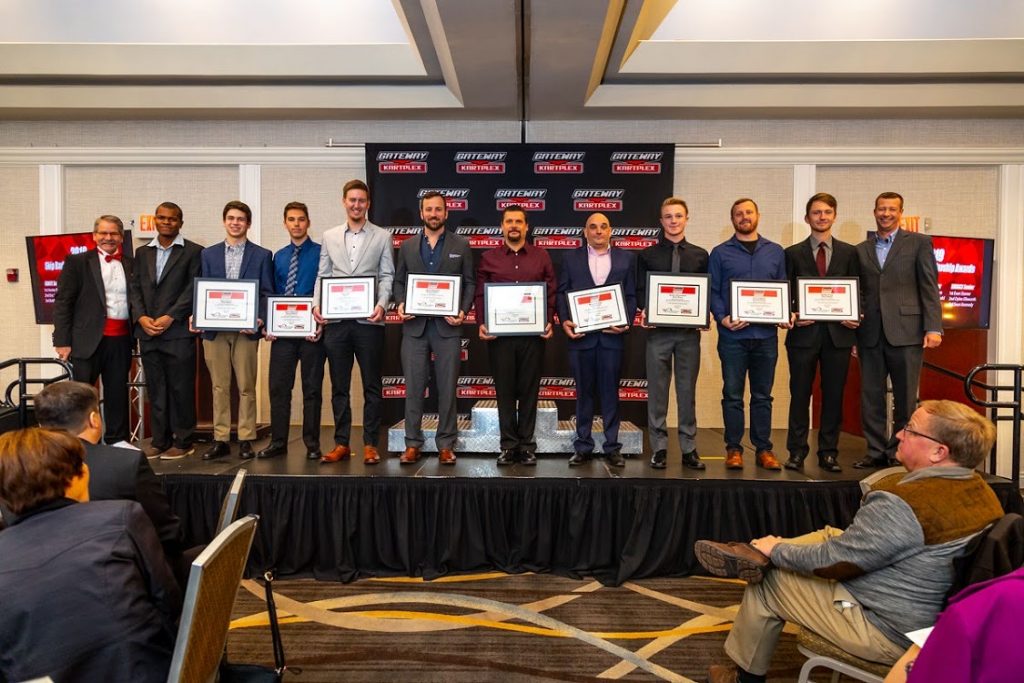 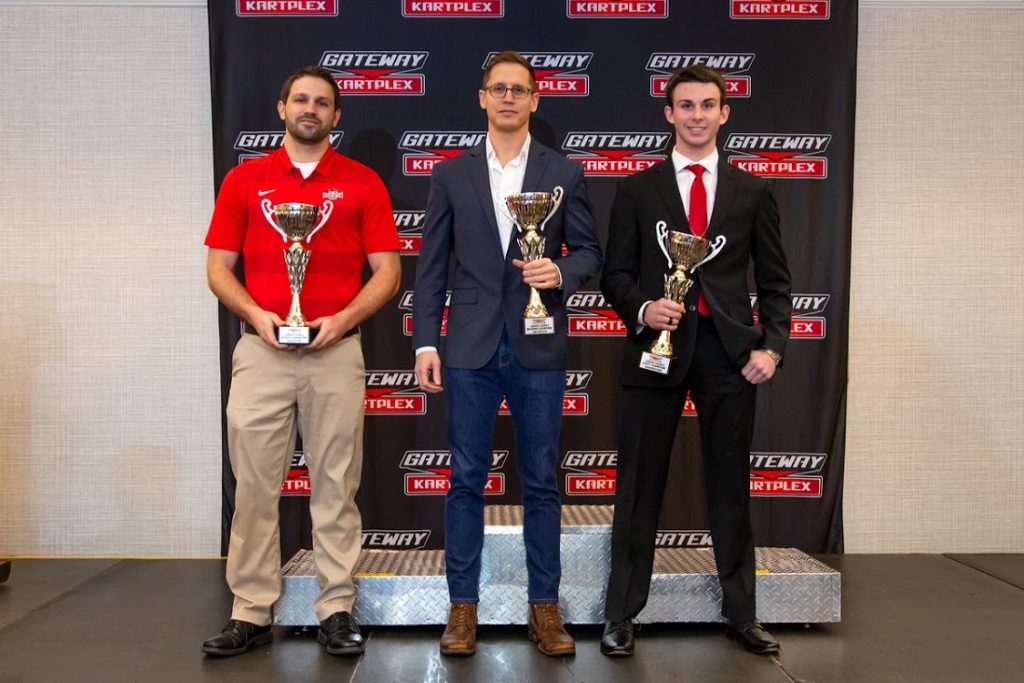 In the iDrive Rental Racing League, the addition of a new Medium class meant three drivers had something to celebrate. Running in the Kartplex’s fleet of rental karts, iDrive competitors battle in spring and fall series to determine who will compete for the overall class championships at the season finale iDrive Shootout. Light champion Aidan RoosEvans dominated the field all year, finishing first in the spring and fall before sweeping the three Shootout races to clinch the championship. Adam Crepin was the Heavy champion, following a string of victories and a first place finish in the fall series.

Three strong competitors rose to the top of the Medium class, with a tie for first and a third driver just four points behind headed into the final race of the iDrive Shootout. Luke Webster may have finished second in the fall series by 29 points but he clinched the overall Medium championship by an even closer margin – seven points. The Kartplex’s three iDrive overall champions each received iDrive Scholarships from Margay Racing that provide them with Ignite K3 karts to use for the 2020 season.

The Kartplex also awards a Gateway Drive to Success scholarship, which helps one deserving individual overcome obstacles and fulfill their dream to go racing by supplying them with an Ignite K3 for the next race season. This year’s recipient was Scott McClendon, Jr. 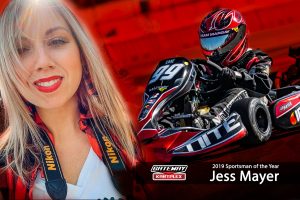 2019 Sportsman of the Year Jess Mayer.

Rounding out the banquet was the last annual award of the evening, Sportsman of the Year. The 2019 recipient, Jess Mayer, has consistently been a positive, powerful presence on race days as well as online, starting the Gateway Kartplex Race Family group on Facebook. Mayer doesn’t just come out to cheer on her son Lane – she is often found capturing a wide assortment of racers, families and friends in photos that chronicle each race, then sharing those images and memories with everyone. She is the Kartplex’s first female annual award winner.

Whether they finished on the podium or at the back of the field in 2019, all Kartplex competitors are now turning their attention to the hunt for a 2020 championship. They’ll have their first chance to prove what they’ve got next month at Gateway Kartplex’s opening race weekend of 2020 on April 4th and 5th. Thanks for a great 2019 season and see you at the track in 2020!