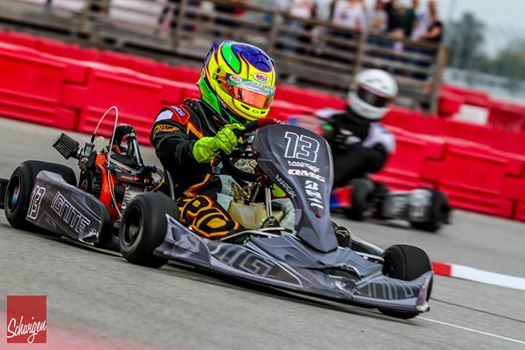 Our Ignite and SuperComp seasons came to an exciting end this past weekend at Gateway Kartplex.

Our Ignite series ended their 2017 season with a double-feature race on Saturday November 4.

The weather pushed us off to a late start, but a little rain couldn’t extinguish our racers fire to fight for the championship title!

Most racers worked double-time to fit both of these races in and have the last chance to work in the points needed for the championship.

Lane Mayer earned the win in both feature races for the Kid Kart Honda class. Mayer even finished first in the second heat of the day for the first round of Ignite races, and qualified first in the Backwards rounds.

In the Ignite Junior class it looked to be a close one as points leader Spike Kohlbecker fell behind, finishing second and fourth in the first two heats on Saturday. Kohlbecker raced back through the ranks though, finishing first in both feature races on Saturday and earning a top qualifying spot for the Backwards races.

The Ignite Master class final was a photo finish, literally! These drivers were racing to the last second in their backwards final, and Mike Lebrun came home with the win! Even though Lebrun had an early struggle, finishing fourth in the first final of the day, the second final was enough to clinch a championship title.

Carter Pryor was on a roll Saturday, winning both features of the day for the Ignite Rookie class.

Blaine Finnegan was unstoppable coming in first place in the second Ignite Senior heat, first in both Ignite Senior finals, and earning the pole in Backwards Qualifying.

Sunday was an exciting day as we rushed to get all races in before ugly weather headed our way. We were successful, and only witnessed a few drops during the awards ceremony!

Spike Kohlbecker http://www.viagrabelgiquefr.com/ was one of our drivers pulling triple duty this weekend, however this didn’t slow him down. Along with a few wins on Saturday, Kohlbecker pulled off a pre-final and final win in the Briggs Junior Class on Sunday!

Kartplex regular Evan Stamer made the move from Briggs Junior to Briggs Senior this weekend and earned his spot in the new class, finishing first in both the pre-final and final races of the day!

Thanks to all our drivers who came out this weekend and to all our competitors from the 2017 season! We hope to see you all out next season!

For compete results from Saturday (11/4) and Sunday (11/5) please visit the links below: