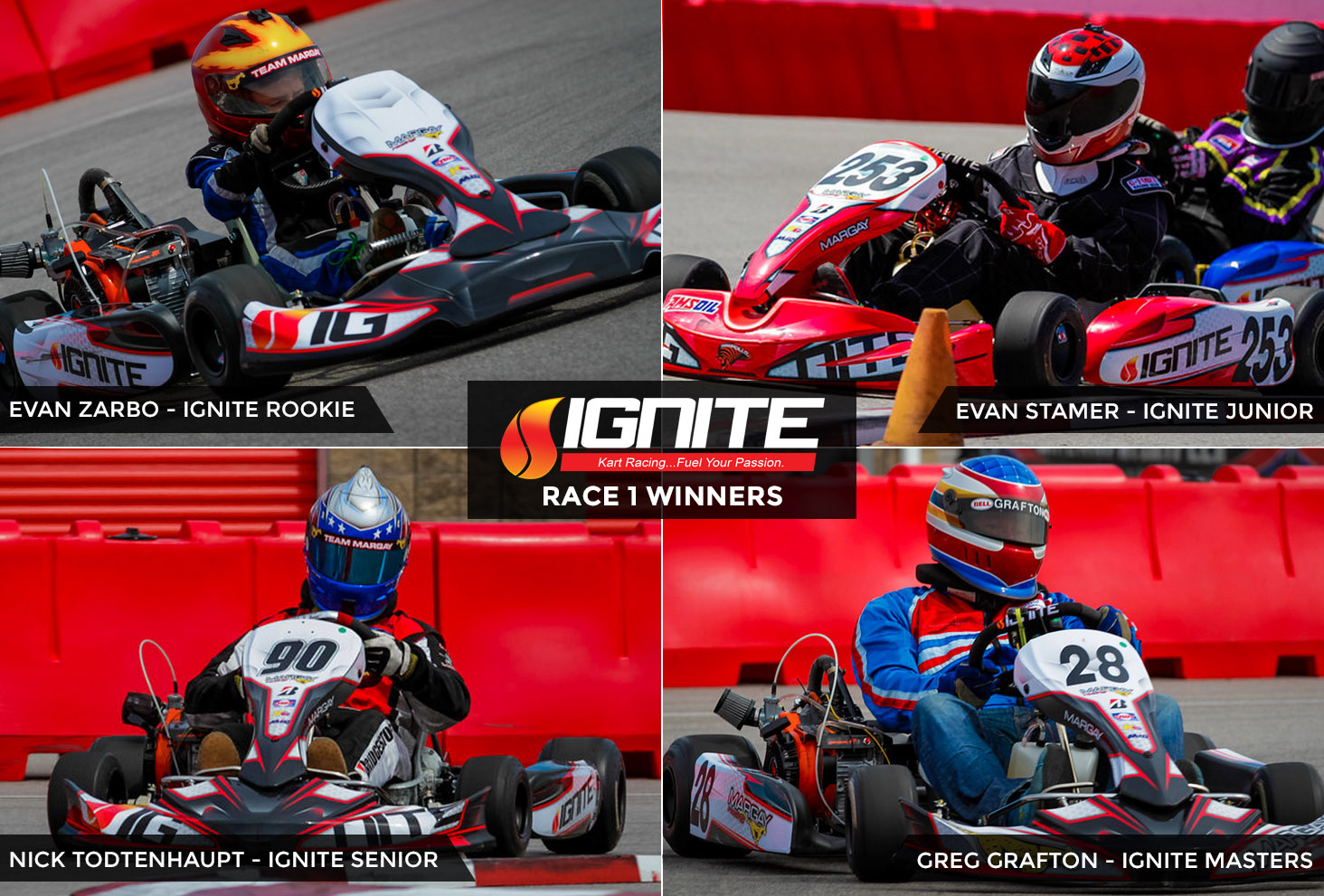 Saturday, April 11th marked the opening round of the Ignite Racing Series at the Gateway Kartplex for the 2015 season.  Four spec classes hit the track for the first time this season: Ignite Rookie, Ignite Junior, Ignite Senior and Ignite Masters.  After a few warm weekends and hundreds of practice laps, it was time for racers to take their first green flag of 2015. 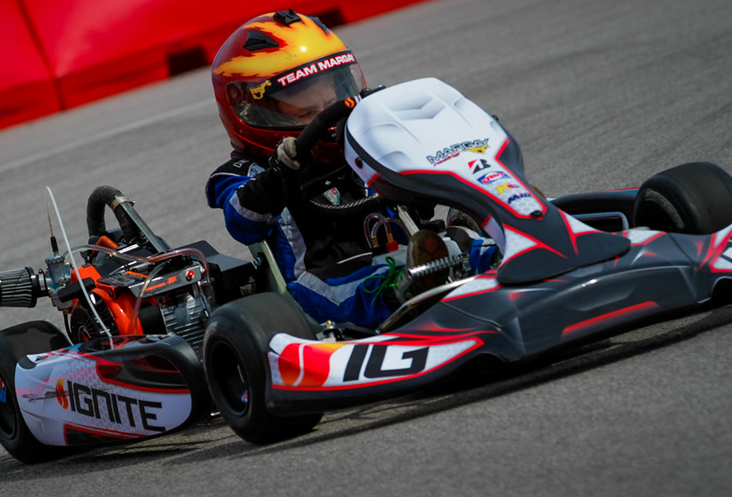 The Ignite Rookie class, for racers age 8-12, took the track first with defending 2014 vice-champion, Reid Sweeny, trying to rise one more step to the top of the podium for the 2015 season.  From the mornings first two practice sessions it looked as though Ignite new comer Evan Zarbo would be the man to beat.  Evan was able to clock a blistering 37.152 lap to Sweeny’s 37.792 during the warm up sessions.  Sweeny and crew made the right adjustments heading into the first heat and Reid was able eliminate the time gap to Zarbo.  Unfortunately a mechanical problem would end Reid’s race early, allowing Zarbo to claim his first heat race win of the season.  Heat 2 would provide a different ending as Reid now had the upper hand, logging the quickest lap of the race with a 37.277.  After 10 laps of close racing, the two were in a dead even drag raced to the finish line with Zarbo claiming victory by a mere 0.081 seconds.  With an epic heat 2 battle, the two were sure to put on a great race in the Final.  From the drop of the green flag, Evan was in control of the race, setting some of his quickest lap times early which allowed him to open up a gap on Sweeny.  Although Sweeny’s lap times kept improving he was unable to catch Zarbo who was able to claim his first Ignite victory of the year by 5.376 seconds.  Congratulations to both drivers on some great, close racing! 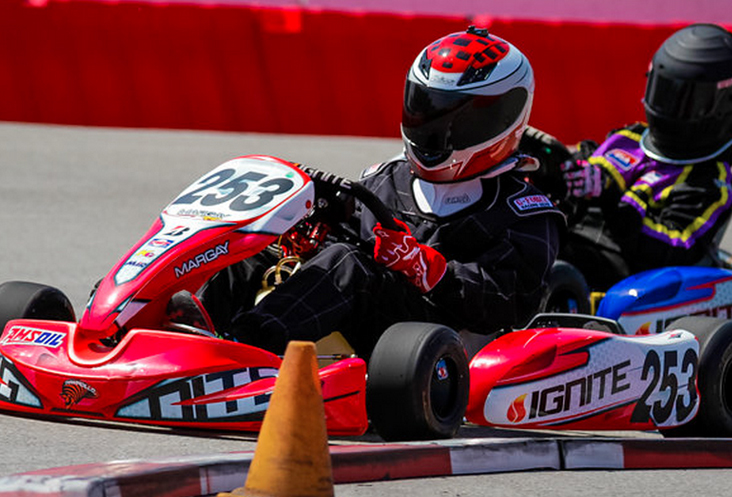 Ignite Junior saw reigning 2014 champion Evan Stamer returning for another shot at glory.  Throughout the morning warm up sessions, Stamer was in control as the only driver to break the 36 second barrier.  Ignite Series new comer Hailey Todtenhaupt was able to close the gap significantly with a strong Practice 2 result.  Stamer was able to cruise to victory in the 2 heat races by a commanding margin of over 10 seconds.  Todtenhaupt was able to close the lap time gap by over a second by the second heat.  Stamer however, would not be deterred and would claim his first victory of the season in dominant fashion, cruising to a 29 second victory. 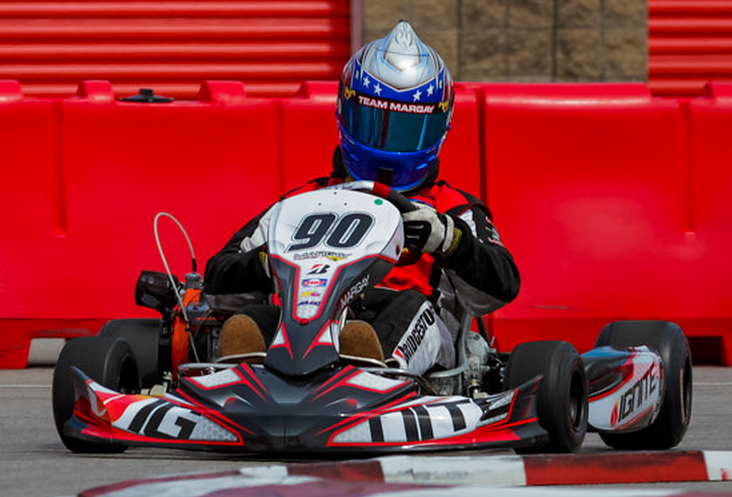 The biggest class of the day, Ignite Senior, was next to take the track.  The spec Ignite program proved that it creates close racing as a number of drivers saw the top of the time charts throughout the two morning warm up sessions.  Heat 1 was a runaway victory for the 2014 third place championship finisher, Nick Todtenhaupt, who had pill drawn the first starting position.  Behind Todtenhaupt, there was a close battle brewing between Ryan Bettenhausen, Colten Dudici, Ryan Rethy and Bobby Hinson.  With close racing comes little room for error.  Contact between the #12 of Bobby Hinson and #89 of Ryan Rethy allowed Colten Dudici and Ryan Bettenhausen to battle it out for the second and third positions.  Dudici would edge out Bettenhausen for second position, followed by Ryan Rethy.  Bobby Hinson would round out the top five.  Heat 2 saw the Heat 1 winner, Nick Todtenhaupt, come from the back to claim another victory, setting the fastest lap of the race with a 35.518.  Behind him, Bettenhausen, Dudici, Rethy and Hinson were at it again, fighting for a good starting position for the Final.  Rethy had an awesome drive, rivaling the lap times of Todtenhaupt late in the race, and was rewarded with the second position.  Bettenhausen claimed another third place position followed by Dudici and Hinson.  With close racing throughout the two heats, the Final was going to be a must watch.  From the drop of the green flag, Todtenhaupt was again in control, resetting fast lap of the race lap after lap, ultimately ending with a season low 35.325.  The fight for the remaining podium spots was on between Bettenhausen, Rethy and Dudici.  All three had broken the 36 second bracket during their on track battles, which saw Bettenhausen improve on his heat results by one position followed by Dudici in third.  Rethy would settle for fourth and Hinson would round out the top 5.  Behind them, Tyler Grafton, Matthew Pyatt, Paul Fodde and Ian Adcock all set their quickest lap times of the day, proving that the season isn’t over yet.  There is still plenty of close racing ahead. 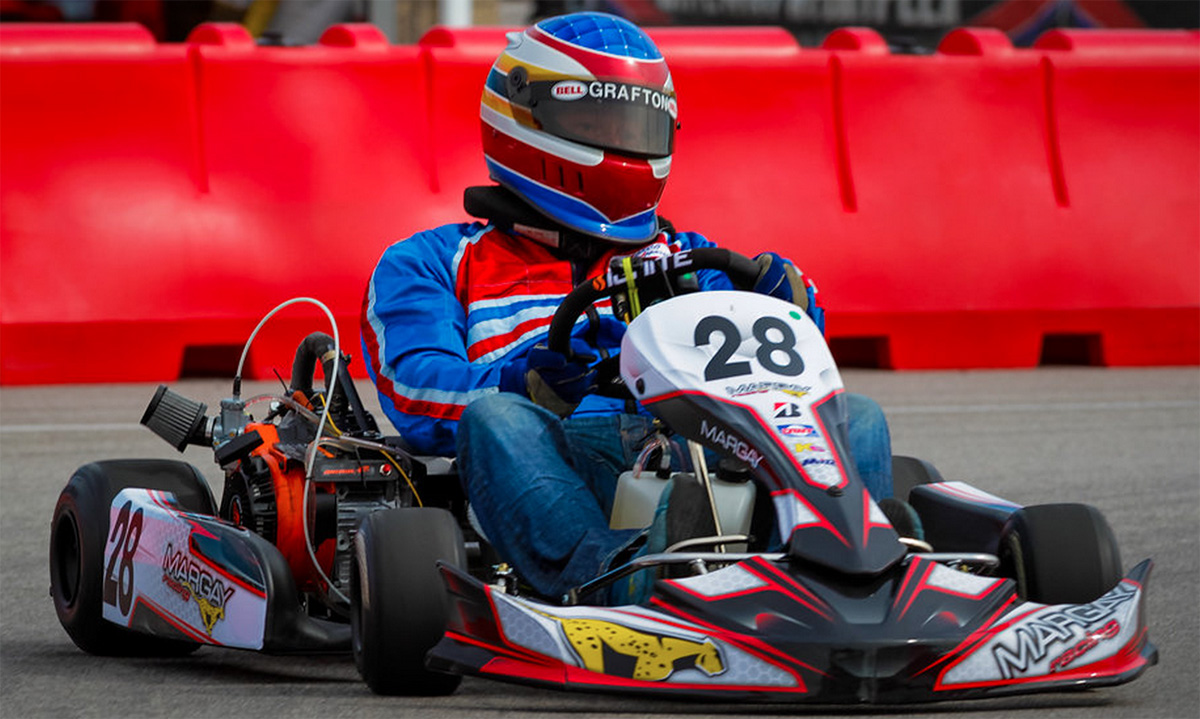 The Ignite Masters may be the most hotly contested class in the series, which it proved during morning warm ups.  Defending 2014 Ignite Masters champion Mark Hudspeth picked up where he left off at the top of the time charts after the first practice, while Mike Lebrun took over after the second round.  Small lap time differences ensured that the heat races would be fun races to watch.  Heat 1 saw Practice 2 fast driver Mike Lebrun and Ignite Series new comer Greg Grafton duke it out for the victory.  Defending champion Mark Hudspeth was unable to finish, leaving the remaining podium spot wide open.  In the end, Mike Lebrun was able to edge out Grafton by 1.257 seconds and Royce Payton would come home in third.  Robert Davis, who finished 3rd in last year’s championship, drove across the line in fourth and Lisa Hudspeth rounded out the top 5.  Heat 2 was another nail biter, but this time it was Royce Payton who was able edge out Grafton by 0.718 at the stripe.  Mark Hudspeth was able to bounce back from his Heat 1 DNF to finish third and Lebrun would settle for fourth.  Ignite Series freshman Jean Roux would round out the top 5.  The Final was hummed to a different tune.  Grafton would use his pair of heat race runner ups and good Final starting position to grab the lead and claim victory by 10.734 seconds while turning some of the fastest laps in the process.  Royce Payton was all alone behind Grafton for the runner up spot.  With the last podium spot up for grabs, the battle began between Hudspeth, Lebrun, Davis and Roux.  Those four drivers came across the stripe less than 4 seconds apart with Lebrun grabbing the final spot on the podium.  Hudspeth came across the line in 4th and Davis rounded out the top 5.  This class alone saw three different winners in the 3 races for the day, so the championship is anything but decided.

ABOUT THE IGNITE SERIES

The Ignite program offers affordable entry into karting in an environment with a level playing field for all. Maximize track time and minimize maintenance and costs as you constantly improve your racing skills in an ultra-competitive environment. Factory sealed engines from Briggs Racing and a chassis developed by industry leader Margay Racing combine to provide a platform where the emphasis is solidly on driver development.

For more information on how to get involved in the Ignite Series, please call Keith Scharf at 618-219-8515